New Stain in the Topographic Area of the liver

New Stain in the Topographic Area of the spleen.07 January 2016Next

Increase in a Pigmentation on the iris (TA of the liver)01 August 2017
New Stain in the Topographic Area of the liver
4 March, 2016in Changes in iridian signs 0 Likes 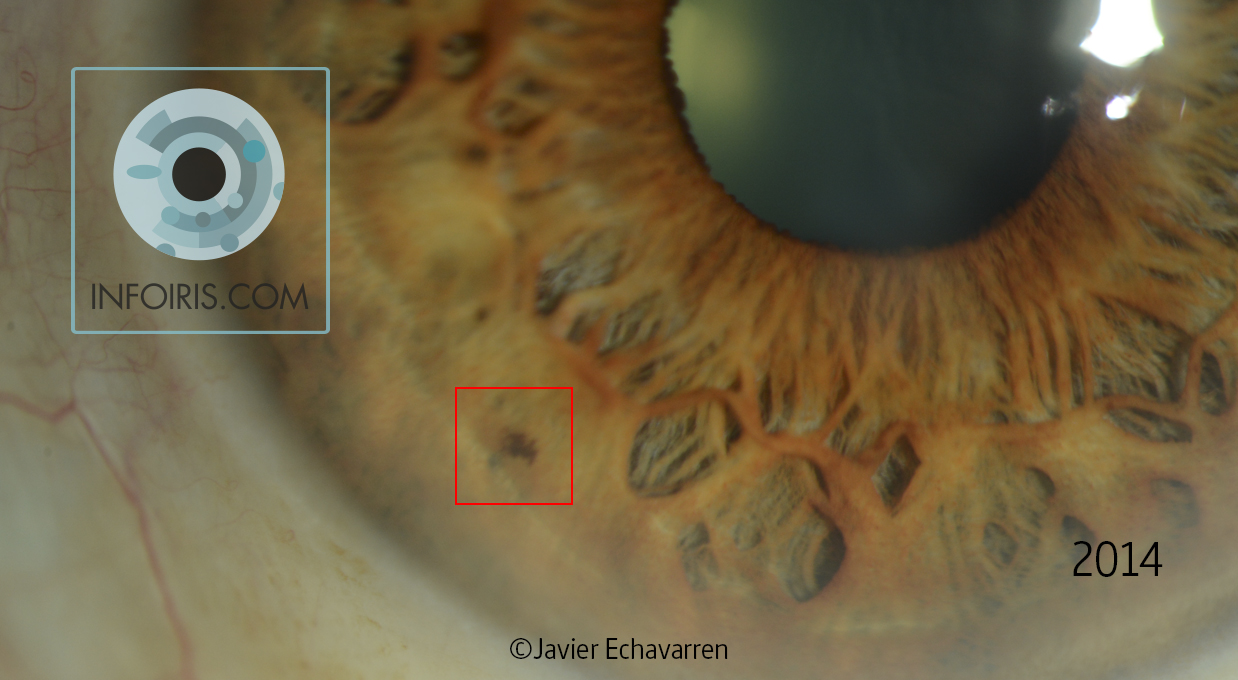 We are going to observe a series of three photographs taken at different times, in which we can note how a “Stain” iridian sign has formed in the Topographic Area (TA) of the liver.

This is a case worthy of study, because we find signs in the TA of the liver on a daily basis, but rarely is it possible to see so clearly how one of them has emerged. 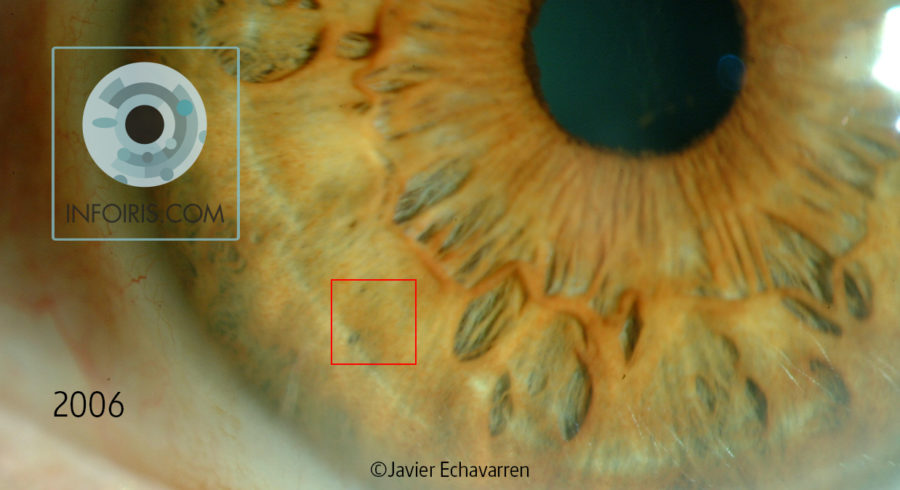 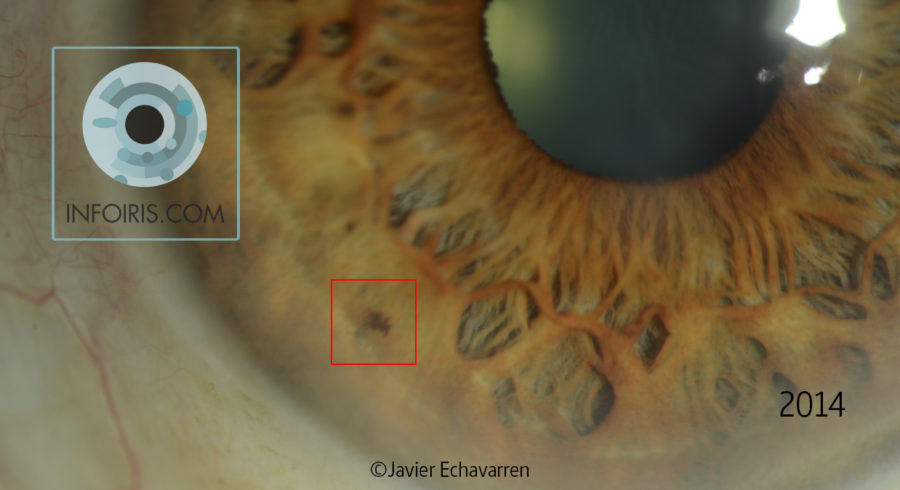 A 67-year-old woman. Right iris. We begin with an initial photograph taken in 2006, where in the red box there are no evident signs that point to the genesis or development of the “Stain” sign that we can see so clearly in the 2014 photograph.

From 2006 to 2009, we can see that a small amount of pigmentation has begun to form on the edge of a “Virtual lacuna”, which shows the starting point, from which the “Stain” will gradually grow out of.

In the period between 2009 and 2014, the “Stain” has increased considerably, making it visible at first glance. This case is an example of the development of a non-hereditary liver disease. During this period of time, the right conditions have occurred for it to develop. 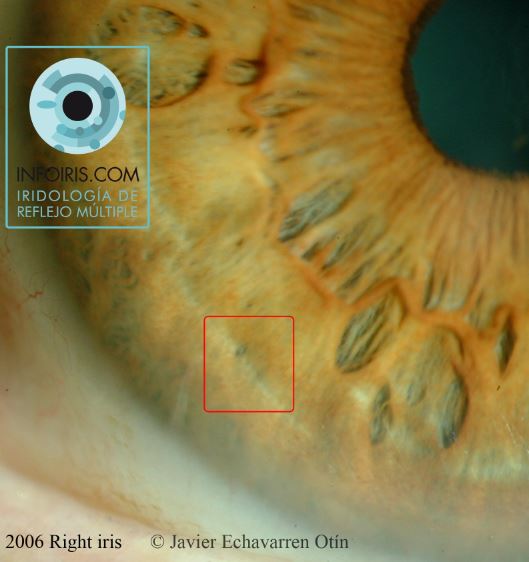 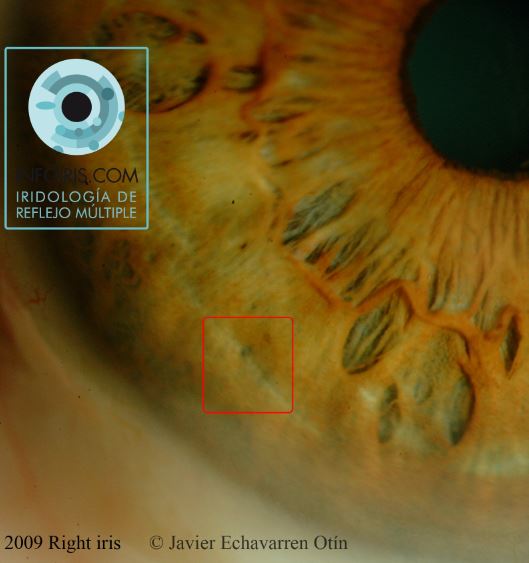 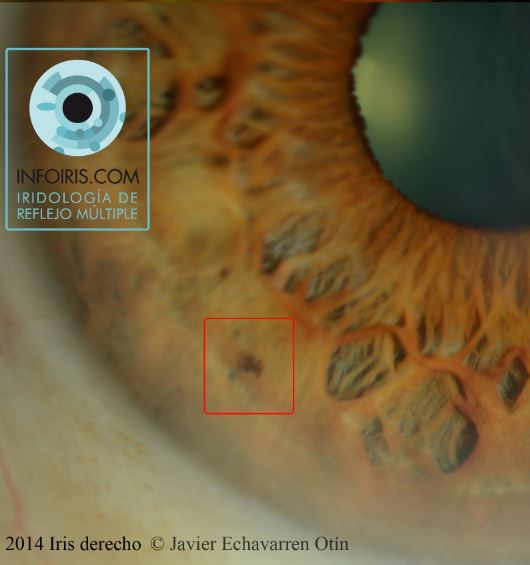 In this case, we know that this sign has manifested itself due to the subject’s hepatic overload, as the result of an increase in medication over the last few years, associated to environmental factors.

Please note: The other iridian signs evident in the TA of the liver of this person are of greater importance to the assessment of the iris, but in this case I wanted to highlight and show the formation and evolution of a new iridian sign. The rest of the image of the iris and its interpretation is reserved for courses and study materials that I will gradually publish.

Further information about the manifestation of liver disorders can be found on pages 287 to 299 of the book “Principios y fundamentos de la Iridología de Reflejo Múltiple”. Editorial infoiris.

Other articles related to the liver:
– Increase of Stain in the Topographic Zone of the liver.

div#stuning-header .dfd-stuning-header-bg-container {background-image: url(https://infoiris.com.mialias.net/wp-content/uploads/2017/06/CS-higado.jpg);background-size: initial;background-position: center center;background-attachment: initial;background-repeat: no-repeat;}#stuning-header div.page-title-inner {min-height: 500px;}
We use cookies on our website to give you the most relevant experience by remembering your preferences and repeat visits. By clicking “Accept All”, you consent to the use of ALL the cookies. However, you may visit "Cookie Settings" to provide a controlled consent.
Cookie SettingsAccept All
Manage consent